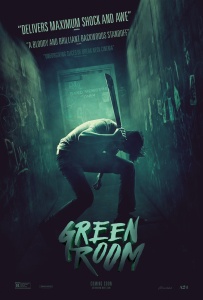 “It is you who are putzes. Little pishas with your dreams of hatred and killing…”

My co-host on the Midnight Film Review podcast, Colin Smith, introduced me to Jeremy Saulnier’s first film Murder Party a few years ago. Then, two years ago, Saulnier’s second film Blue Ruin landed on my top ten list. Jeremy Saulnier is an auteur in every sense of the word. His latest film Green Room is somewhat of a combination of the ideas produced by his first two films and is a resounding success.

Pat (Anton Yelchin), Sam (Alia Shawkat), Reece (Joe Cole), and Tiger (Callum Turner) are members of a punk band “The Ain’t Rights” traveling through the Pacific Northwest. In Seaside, they meet Tad, a local radio host who sets them up with a gig outside Portland. The gig is a much needed opportunity for the band to make money, but it’s for a large group of skinheads. Things do not go as planned, and the band members are forced to fight for their lives. Saulnier has a way of making his films feel lived in. While most filmmakers struggle to make movies feel realistic or at the very least plausible, Saulnier has this ability in spades. Green Room is not only realistic, it feels almost voyeuristic.

The tension in Green Room is on a completely different level than anything I’ve experienced in years. The feel of this film is extremely visceral and will leave you gripping the armrest. Saulnier is a crafty director who uses violence sparingly, but effectively. The violence on-screen can be at times brutal and unsettling. The violence that takes place off-screen seems even more off-putting. The sounds of thumping fists and skin-piercing knives is horrific. Jeremy Saulnier’s camera work inside versus outside is unique and succinct.

The acting is equally great. Imogen Poots plays Amber, a concert attendee who gets sucked into this wild ride. Poots isn’t necessarily the lead, but she is the star. Her performance is nuanced and even. I’ve never thought of her as an actor with a lot of range, but she does a terrific job. Macon Blair isn’t a household name (yet), but he is special. He played the lead in Blue Ruin and blew me away. Saulnier has stated that he wants to be known as the director who found Macon Blair. The two are a match made in cinema heaven. Blair reminds me of a young Philip Seymour Hoffman. The ease with which he delivers Saulnier’s dialogue is a thing of beauty. Apart from Blair and Poots, the cast does an admirable job. Anton Yelchin is essentially the lead and has the majority of the dialogue, but he doesn’t give a transcendent performance. The biggest name attached to this project is Patrick Stewart. Stewart stars as Darcy, the owner of the venue that The Ain’t Rights is playing when all hell breaks loose. Darcy is also the leader of the group of neo-nazis that oppose the band. Stewart’s performance is surprisingly subdued. This is something that makes the atmosphere so natural. He never waivers and always has a plan. He is smart and acts with purpose.

Green Room isn’t perfect, but it’s pretty close. The only problem I have with the film is that it doesn’t seem to say anything larger. Blue Ruin had strong themes about family and loss, but Green Room doesn’t seem to have any strong themes. The value of the film rests solely in the experience, which is unforgettable. Jeremy Saulnier is a clever writer and director. His dialogue is specific to him and unbelievably natural. Much like Tarantino, if you hear a line of Saulnier’s dialogue, you know its his. Saulnier has found a muse in Macon Blair, and I hope to see the two make many more films together. Imogen Poots is now fully on my radar, and I’m excited to see what choices she makes going forward. She has the potential to be a superstar as well as an award winner. Green Room is at its heart a horror film, and a very good one at that. When it’s all said and done, Nazi Punks are still the worst.