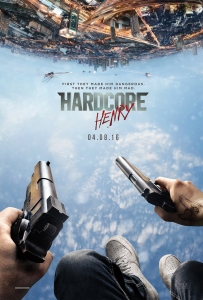 -Drake (Hobo with a Shotgun)

No other genre in film, with maybe the exception of horror, evolves as quickly as action. Dirty Harry and Death Wish were really the birth of the action film, and it quickly transformed cinema. By the late ’80s, action films were a huge box office draw. Films like Die Hard, Cobra, and Lethal Weapon upped the action while their leads remained just ordinary everyday people. The ’90s and new technology bolstered action into the sci-fi realm with films like Terminator 2: Judgment Day and The Matrix. Super humans and robots were now all the rage. CGI slowly took over the industry, and nothing was affected more than the action genre. Comic book films were the new action flicks, and studios were doing things they never dreamed possible. Spider-Man and Iron Man were not only legitimate, they also looked good too. Fast forward to 2016, and we now have the release of Hardcore Henry, a full length first-person action film. Is this the next step in the evolution of action films, or is this film a one trick pony?

Hardcore Henry is Ilya Naishuller’s first feature length film. Naishuller in fact hasn’t done much of anything before Hardcore Henry. His only real credits are a short film and a writer credit on the video game Payday 2. This all makes sense though. Naishuller’s direction is very immature, and his writing even more infantile. That doesn’t mean this isn’t an enjoyable film. The story and extremely thin plot are somewhat engaging. But by not allowing our lead character speak, we are somewhat deprived of a real character. Naishuller’s point here is to make this feel like a video game, and it does. The only real question then is, why wouldn’t I just play a video game?

The performances in Hardcore Henry are actually very good. Danila Kozlovsky as Akan, the always present villain, is marvelously over-the-top. His performance is fun and silly, and frankly I loved it. Sharlto Copley as Henry’s only friend Jimmy is equally fun. We get to see his acting range stretched as far as this film could possibly allow. Copley has chosen some fun and interesting roles over his career, and Jimmy is just another notch on his belt. Haley Bennett is fine, but underutilized. She is a talented young actress who has a significant career ahead of her, but this film called for her to be nothing more than a plot point. Perhaps the most baffling thing about Hardcore Henry is Tim Roth. He is billed as more than a cameo, but has about as much screen time as one of Akan’s henchmen.

The best thing I can say about Hardcore Henry is that it is fun. There are action set pieces that left me in awe. There are acts of violence that are extremely brutal and will rival anything you’ve ever seen. The physicality of the title role make it incredibly thrilling to watch. Henry scales buildings without any hint of CGI or camera trickery (even though this film has plenty of that) and utilizes the act of falling perfectly. The editing and hand to hand fighting are choppy, which makes it hard to stay focused. But in general, Ilya Naishuller crafted some excellent action set pieces.

Unfortunately, Hardcore Henry can’t live up to its potential. The film feels gimmicky only because the plot is so trite. The performances are great, and Sharlto Copley shines brightest of all. I would love to see a film that involves only his character. Akan is a memorable villain, but a lot of character is left out. I kept wondering where his power came from, and unfortunately it’s never explained. Ilya Naishuller might be talented, and maybe we will see him grow into an excellent director, but this film has severe deficiencies that can’t be ignored. Hardcore Henry is fun, but ultimately it felt like watching your buddy play a video game. In my head I kept thinking, when is it my turn?