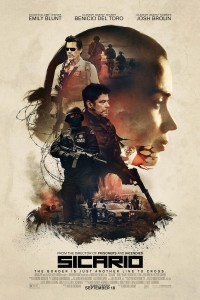 “Sometimes a revolution is exactly what is needed for cleaning out the system.”

-Sands (Once Upon a Time in Mexico)

Denis Villeneuve is far from a household name. His movies are thick, deep, and can seem out of touch with the average film goer. His talent, however, is unquestionable. His film Incendies was nominated for an Oscar, and he has been picked to direct the new Blade Runner. Sicario is on another level than anything he has done before. Villeneuve is known for his multi-layer themes and intricate relationships, so Sicario is the next logical step. What is so striking though is how well he shoots action.

Sicario is Spanish for hitman. We are told this right before the film starts, but little is made of this term throughout the film. Sicario is more about the relationship of bureaucratic offices and illegal drugs than the art of doing hits. That doesn’t mean there aren’t any. Little can be said of the plot because of the way the film unfolds. Emily Blunt plays Kate Macer, and we share her viewpoint. She is brought into a secret joint task-force to fight cartels along the Mexico border. Every question she asks is for the benefit of the audience as well as her character. Nothing is ever revealed to us that isn’t first relayed to our heroine. This is a unique and effective way to tell Sicario‘s twisted story.

Blunt is rising quickly up the acting ranks. Her performance here is terrific and on-point. She is petite, but the way she carries herself never makes her feel fragile. Much like her role in Edge of Tomorrow, she has the ability to kick butt and make it believable. Blunt could be a legitimate action star. Josh Brolin’s character Matt Graver is perfectly written for him. Graver heads up the task-force, and his laid back attitude is at times unnerving. Brolin’s cheery demeanor and sly smile could easily come off as pandering, but instead feels earned. He has a grip on life and understands his role within the path he has chosen. Benicio del Toro’s take on the mysterious Alejandro is mesmerizing. Alejandro is the real star of the film. The quiet charisma that del Toro is so good at makes Alejandro seem beyond terrifying.

Denis Villeneuve, Roger Deakins, and Taylor Sheridan have crafted a beautifully directed, shot, and written film. Deakin’s cinematography is on par with anything he has shot before. Mexico has never looked so beautiful. Sheridan’s script is flawless. He tells the story of Sicario at his pace. The script never shows its hand and always stays one step ahead of its audience. Villeneuve has, in my humble opinion, crafted a masterpiece, and a lot of that has to be attributed to his team.

Villeneuve’s direction in the past has been at times too subtle or too on the nose. In Sicario it is completely perfect. His big sweeping shots of Mexico and Arizona are gorgeous. But his ability to make us feel the space his characters are in is what sets this film apart. The way he frames action shots builds extreme tension, and when you lay the score on top of it, you feel as though you can’t breathe. He is a very propulsive director, and Sicario feels that way too. Every scene has purpose and momentum. The action and violence aren’t glorified, but they are far from a second thought. The way he shoots action is unique, and each shot seems well thought out and brutal.

Sicario is almost a perfect film. Emily Blunt and Benicio del Toro’s performances are amazing. The technical team is a perfect combination of skill and experience. Denis Villeneuve has directed a film that elevates the art of cinema. The sweeping themes critiquing the War on Drugs and the War on Terrorism are spot on. Politics aside, the way Villeneuve has a handle on government corruption is noteworthy. Villeneuve’s understanding of “blow back” and the CIA’s version of the “Chaos Theory” makes Sicario a film to more than watch. Sicario is a film to study. Because of its depth, Sicario is a movie that I not only will watch again, but a film that I can’t wait to re-watch.