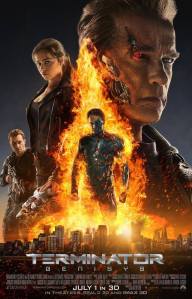 “This time travel crap, just fries your brain like an egg…”

Sequels are entrenched in film. We have no way around them. They are ingrained in our culture. If a movie is the least bit successful, there will be a sequel. Some films like 22 Jump Street and Scream have fun with the idea of a sequel and do something subversive or meta. Other films like Batman and Robin have almost destroyed franchises. So when I first heard about Terminator Genisys I was more than skeptical, but after Mad Max: Fury Road and Jurassic World, I was oddly optimistic. Could Terminator Genisys be another successful sequel?

Unfortunately the answer to that is a resounding no. Terminator Genisys is a film that is completely contrived and absent of creative fulfillment. The film starts with a voice over from Kyle Reese (Jai Courtney) about how he was saved by John Connor (Jason Clarke). Reese is, of course, sent back to 1984. He must protect Sarah Connor (Emilia Clarke) from a terminator (Arnold Schwarzenegger). But something isn’t right. Things are different, and Reese quickly finds himself being hunted by a T-1000 terminator.

The first act of Genisys is actually very interesting. The story plays with time travel in a way that the other films decided to not explore. The initial action sequence after Reese is sent back in time is very reminiscent of the first film. If the film were more invested in this idea, I would have loved it, but instead we must time hop to the future where some very questionable plot points must take place. Let me also say that the marketing for this film is atrocious. The “big twist” in the film is given away in the trailer and on the poster. So the scenes that take place after Reese and Sarah travel to 2017 are void of any tension.

The acting is extremely subpar. Emilia Clarke is a good actress, but here she seems completely lost. Jai Courtney is an albatross. He has zero charisma and is a completely inept actor, yet he continues to be cast in high profile films. Jason Clarke is serviceable, but wasted. Surprisingly, Arnold Schwarzenegger did the best acting. Schwarzenegger is in another film because he is having fun, something the rest of the cast seems incapable of having with the provided material.

Alan Taylor is a very good director. His work on Thor: The Dark World and Game of Thrones is outstanding. But with Terminator Genisys there seems to be no rhythm or point. The writing might be the main problem. It is hard to direct a film that is so poorly constructed on the page. Dialogue is stilted, and the amount of exposition is silly. What seems to have started with such promise devolved into a convoluted mess by the film’s end.

Terminator Genisys feels like it was made for hardcore fans, but at the same time bastardizes the series. The first act is extremely good. So good that I wouldn’t mind watching it again. But just that act. The original Terminator film was essentially a slasher film, two people being chased by an unstoppable force. This is what the beginning of the film hearkens back to. But as the movie progresses, the plot digresses into a middling summer fare. I wish I could travel in time and convince myself to not see this film.