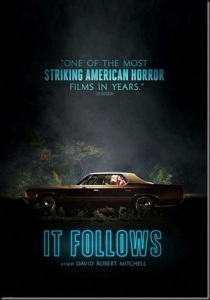 “But you can’t kill the boogie man!”

There is a crop of talented young writers, directors, and actors who have popped up in the last five years. They have made an unmistakable mark on independent horror cinema. Filmmakers such as Adam Wingard, Ti West, E.L. Katz, and Simon Barrett have created a movement called “mumblegore,” a play on the popular sub-genre “mumblecore.” David Robert Mitchell’s newest feature It Follows falls right in step with this new fad.

Maika Monroe plays Jay Height, a college student who has recently met Hugh, a boy who she sees as a potential mate. After a few dates, Jay decides to become intimate with Hugh. Almost immediately, Hugh informs her that she must run for her life because something is coming after her, and the only way to survive is to pass it along through sex with someone else. The plot is slightly thicker, but this is the basic idea.

Monroe is fantastic as Jay, and between last year’s The Guest and now It Follows, Hollywood has a new scream queen on its hands. Her turn from euphoric to horrific is something special. The cast is filled with unknowns and young actors, but they all do an exceptional job. Particularly good is Keir Gilchrist as the awkward Paul. Paul is dorky but brave. He wants to be Jay’s knight in shining armor.

As great as Monroe is, the real star is director David Robert Mitchell. His direction harkens back to the great horror directors of the ’80s. It Follows feels like it came directly out of John Carpenter’s filmography. From the ambiguous place and time, to the extremely authentic ’80s synth infused score, It Follows feels familiar but is so different. The any-town U.S.A. setting helps create a sense of dread, much like Wes Craven’s Nightmare on Elm Street, as well as the unsettling themes about the dangers of teenage sex that were so popular in ’80s horror.

Even though there are a few plot holes, the script is tight, and the tension is thick. The only real problem the film has is its uneven pace. While it starts out with a raging boil, it quickly slows to a simmer until Jay completes the “deed” with Hugh. Even after this, there are shots that feel like they are being art house for the sake of being art house. In a film where evil is constantly walking towards our protagonist, the tension should never be undercut by long takes and slow close-ups.

Pacing issues aside, It Follows is thrilling and occasionally scary. David Robert Mitchell calls back to the heyday of horror with psychological scares and a score that adds a little flavor to a very good film. Maika Monroe leads a talented cast and makes Jay’s horrific journey feel every bit as terrible as it should be. It Follows won’t terrify the masses, but it is an excellent entry into the “mumblegore” sub-genre.

One thought on “It Follows”