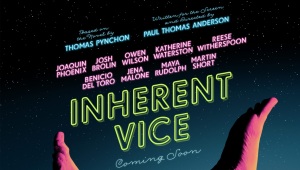 Critics are doing their absolute best to compare Paul Thomas Anderson’s latest film Inherent Vice to something else. I’ve heard the comparisons to The Big Lebowski, The Long Goodbye, The Big Sleep, and even Top Secret; but here’s the thing, it’s not like any one of those films. Inherent Vice is all those films thrown into one. P.T. Anderson’s filmmaking has been unique and influenced from the very beginning.

Inherent Vice is a long and curvy road that takes unique stops to explore Los Angeles ethos. I’m not going to spend very much time on the plot because it is super thick. Our leader on this road is Larry “Doc” Sportello, a wise stoner who runs his own private investigation office. Doc is played by Joaquin Phoenix who soars higher here than in any other role he’s played. Doc is a flawed but honest man who wants to be left alone but strives to make a difference. Doc is approached by Shasta Fay Hepworth (Katherine Waterston), his ex-girlfriend, who tells him of a plot to kidnap her billionaire boyfriend and that she might also be in danger.

Paul Thomas Anderson has taken Thomas Pynchon’s novel and turned it into a yarn of classic noir. It’s beyond strange to think of this movie as a P.T. Anderson film because it’s so niche’. But after seeing Inherent Vice, it slides right in between Boogie Nights and The Master nicely. Anderson uses his knack for exporting us to a time and place beautifully here. We also see how he’s grown as a filmmaker. In Boogie Nights he used a lot of quick cuts and camera tricks, but in Inherent Vice he uses long takes and extreme close ups to convey emotion and scope. Anderson seems to be the best “actors” director in Hollywood allowing them the freedom to explore their characters.

Inherent Vice has been jokingly called “Incoherent Vice” but that’s a low brow attempt to attack the film. Inherent Vice at times meanders but is a far more coherent film than The Master. The Master is probably my least favorite Anderson film (my wife hated it), but the acting was out of this world. Inherent Vice actually has a narrative and just as many great performances. Josh Brolin as Christian “Bigfoot” Bjornsen is probably my favorite, but Reese Witherspoon, Owen Wilson, and Joanna Newsome all give extraordinary performances. Newsome’s character is especially interesting because you are not entirely sure she isn’t just part of Doc’s imagination.

Inherent Vice is a movie that needs multiple viewings to be truly appreciated. Anderson has so much going on with great acting, beautiful expert camera work, and a plot that is thicker than molasses. Phoenix’s role as Doc should go down in cinema history as one of the best formed characters ever to see the screen. P.T. Anderson seems to have grown as a filmmaker, and even though this falls just short of greatness, it’s an amazing film. There Will Be Blood is still his masterpiece, but Inherent Vice might be a close second.

One thought on “Inherent Vice”